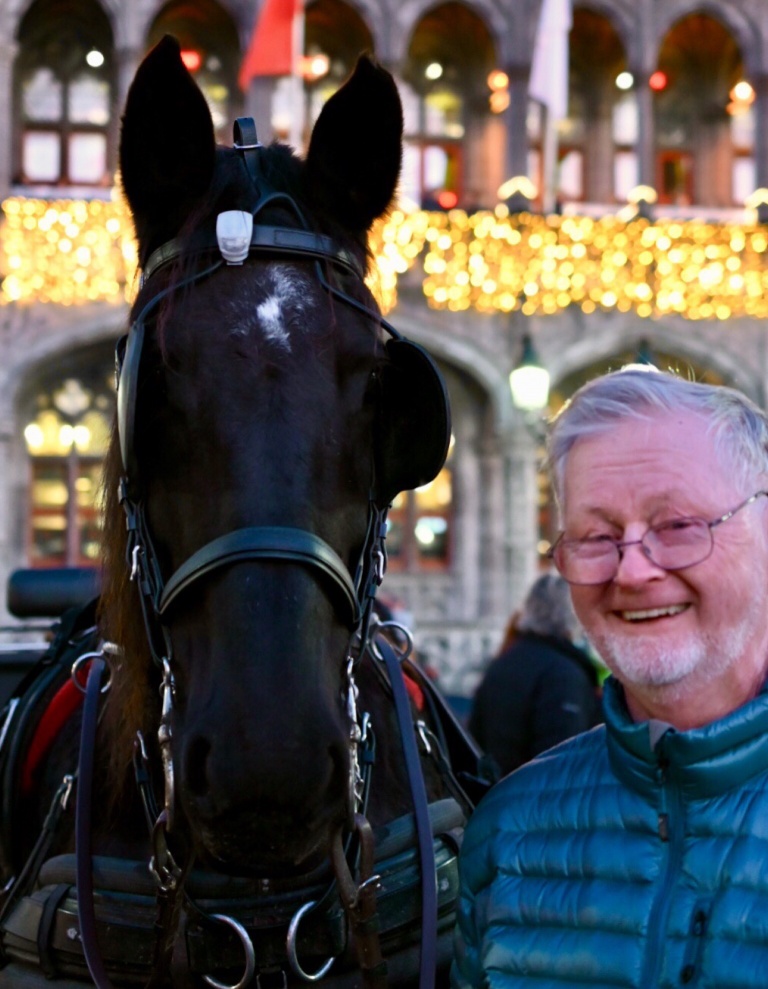 No entries have been mapped yet.
1
Bruges

Yesterday I waited anxiously to see if my parents were able to get out of Boston to fly to London to experience some European Christmas Markets for the first time. A nor’easter decided to hit New England exactly when they were to fly. This is my dads first trip to England since I moved here six years ago....(shameful)

luckily with a delay of three and a half hours they were able to take off. Whew...

I have planned a three day tour of some European Christmas Markets. We crossed the English Channel via the Euro Tunnel and headed straight to Bruge, Belgium. The first market of our tour.

The Belfry of Bruges (Dutch: Belfort van Brugge) is a medieval bell tower in the centre of Bruges, Belgium. One of the city's most prominent symbols,the belfry formerly housed a treasury and the municipal archives, and served as an observation post for spotting fires and other danger. A narrow, steep staircase of 366 steps, accessible by the public for an entry fee,leads to the top of the 83 m (272 feet) high building, which leans 87 centimeters to the east.

To the sides and back of the tower stands the former market hall, a rectangular building only 44 m broad but 84 m deep, with an inner courtyard. The belfry, accordingly, is also known as the Halletoren (tower of the halls).

The street below is where our Air B&B is located. It’s about a 8 minute walk to the town center.

I had to show off my favorite chocolate shop, Dumon.

Waffles were first made in the Middle Ages, and were sold as crispy and rich street-side snacks by vendors outside Churches in Belgium. Agriculture was the main subsistence pattern then, and barley and oats were quite easily available to use as ingredients. In fact, King Charles IX of France said that the vending stalls had to be kept at a safe distance from one another, because the eating of waffles had become such a popular phenomenon.

We often misconstrue the waffles made in Belgium to be of one type. This is not the case. There are, in fact, two types of waffles that originated in Belgium. These are known as the Brussels waffles and Liege waffles.

The Brussels waffle is what is most commonly known as the Belgian waffle in the United States. It was introduced to the USA at the 1964 World’s Fair in NYC by Maurice Vermersch as the ‘Belgian Waffle’, since most Americans did not even know where Brussels was. The Liege waffle is the other type, more common in Belgium, and known for its rich, sticky texture that is accentuated with every bite.

This square was the medieval commercial centre of the city. Without any doubt one of the city's most impressive monuments is the Belfry and Cloth Hall and on the north side the Provincial Palace, nowadays being the seat of West Flanders Provincial Court. Previously on this spot was the medieval Water Halls, which were covered halls where commercial ships could unload products for storage or for sale at the market (hence the name Markt/Market Square).

Sampling some of the local cuisine

The second morning of our European Christmas Market tour started again in Brugge. We awoke to a cool crisp morning and went on the hunt for some Belgium Lace. We found a few shops then decided to head off to Aachen, Germany.

This will be the largest Christmas Market of the trip. Aachen Christmas Market is the most famous in all of Germany. Set up in the shadow of the magnificent Aachen Cathedral, it looks like a delightful Christmas village during the day, and transforms into a fairyland of sparkling Christmas lights at night.

Aachen is located in the most western part of Germany where the country borders both Belgium and Holland. The town has a rich history, being Charlemagne’s favorite residence, as well as the primary spot for the coronation of Germany’s emperors.

Interestingly, for such a popular and world-famous Christmas Market, this market did not open until 1973. Since that time it has grown so that it spills from the Cathedral marketplace down many of the small side streets.

I first had to introduce Mom and Dad to Dampfnudel, my favorite German treat.

Dampfnudel (plural Dampfnudeln, lit. "steam-noodle"; Alsatian: Dampfnüdel) is a sort of white bread roll or sweet roll eaten as a meal or as a dessert in Germany, Austria and in France (Alsace). It is a typical dish in southern Germany.

I think is was a hit, as we had to buy another one before we left the market.

Markets are to enjoy the local cuisine and we sampled many different treats today.

Aachener Printen are a type of Lebkuchen originating from Aachen. Somewhat similar to gingerbread, Printen were originally sweetened with honey, but for two centuries the tradition is to use a syrup made from sugar beets.

After we stuffed ourselves, we rolled to the car and headed off to Monschau, where we will be spending the night. I have not told Mom & Dad where we were staying so it would be a surprise when we arrived. It was getting dark when we pulled up to our accommodation.

We arrived at Monschau Castle which is where we will be staying tonight.

Monschau Castle (German: Burg Monschau) is a castle in the eponymous town of Monschau in the southern part of the Region of Aachen.

The hill castle is first recorded in 1217 as castrum in Munjoje by Archbishop Engelbert I of Cologne. It was expanded in the middle of the 14th century into a fortress for the counts of Jülich and equipped with mighty ring walls and wall walks. In 1543 troops of Emperor Charles V besieged the site with heavy guns, captured it and plundered it together with the town of Monschau.

In the early 19th century the French administration declared the castle to be state property and sold it to a private buyer who had the roofs removed in 1836 and 1837 in order to avoid building tax. As a result, the castle fell into ruins until, in the early 20th century, the government of the Rhine province secured and repaired it.

Mom and I took a walk this evening to explore the town in preparation for more adventures tomorrow.

The town is located in the hills of the North Eifel, within the Hohes Venn – Eifel Nature Park in the narrow valley of the Rur river. The historic town center has many preserved half-timbered houses and narrow streets have remained nearly unchanged for 300 years

I was a bad daughter as I would not agree to eat more food in the village after the days amount of consumptions. 😕 hopefully I’ll be forgiven tomorrow, when we explore the small Christmas Market in the town below.

Today we awoke to freezing rain, which made running a little challenging this morning. The plan today was to explore to local Christmas Market down in town and then travel part way back and to spend the night in the Netherlands.

Fortunately or unfortunately turned into rain which made it rather raw and cold. It \240we still managed to buy a few local goodies.

A schnitzel is a thin slice of meat fried in fat. The meat is usually thinned by pounding with a meat tenderizer. Most commonly, the meats are breaded before frying.

Tomorrow we are stopping in Ghent on our way to Dunkirk to catch the ferry back to the UK.

We got an early start so that we could squeeze in Ghent’s Christmas Market.

The Gravensteen (Dutch; literally "Castle of the Counts") is a medieval castle at Ghent, East Flanders in Belgium. The current castle dates to 1180 and was the residence of the Counts of Flanders until 1353. It was subsequently re-purposed as a court, prison, mint, and even as a cotton factory. It was restored over 1893–1903 and is now a museum and a major landmark in the city.

We arrived a little early before all of the stalls opened up but managed to see a fair amount before we had to head to the port in Dunkirk to catch the ferry.

A cuberdon is a cone-shaped Belgian candy. In Dutch it is also known as a neus (nose), Gentse neus (Ghent nose), or neuzeke (little nose) for its likeness to a human nose. In French, cuberdons are also called chapeau-de-curé and chapeau-de-prêtre (priest's hat). Cuberdons are made with gum arabic candy crust with a soft, traditionally raspberry-flavored inside filling. Their color is purple, though more recently differently colored and flavoured variants have been available as well. They are traditionally about 2.5 cm wide and weigh approximately 10 to 18 grams, although smaller versions are also commercialized. The outside is relatively hard, whereas the inside is gelatinous.

Cuberdons can only be preserved for about three weeks, after which period the inside begins to crystallize. This limited preservability is the reason why cuberdons are infrequently exported outside Belgium.

Now we are heading back to the UK

We had one day to do a bit a sightseeing in London. We decided to head to Greenwich and then up the Thames for a brief tour of London. Dad being opposed to London seemed to enjoy Sundays Roast dinner in the Gipsy Moth pub and a boat trip up to Westminster.