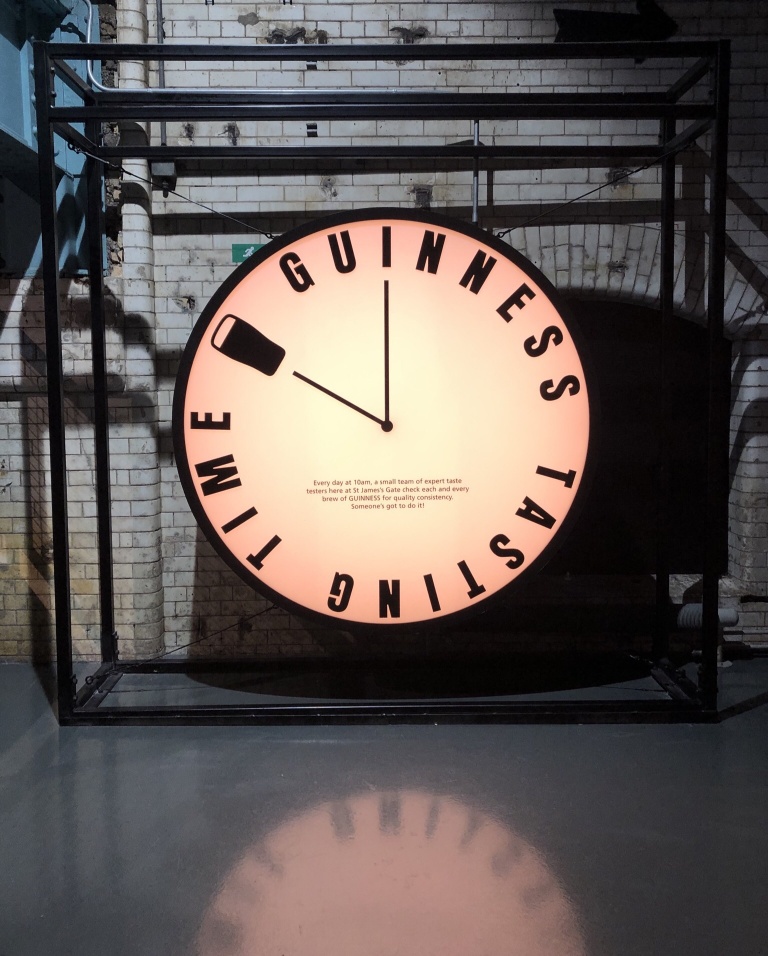 No entries have been mapped yet.
1
Bar Rua

Jordan and I finally arrived in Dublin today (Yay!) after many delays in our connecting flights. We met up with Rachel and found our hostel for the night. The hostel was very colourful and was much like a university dorm.

Today was also Valentine’s Day. ❤️ I was wishing I could be with Daniel today, but since that wasn’t possible, I treated myself to a Bailey’s Coffee. 😋

The three of us spent the afternoon exploring the area close to our hostel. I loved the look and feel of the city, especially the cobble stone streets.

A restaurant called Bar Rua, where we stopped for dinner and the Bailey’s Coffee. ☕️

We came across and souvenir shop with a wide selection. Not to mention there was Irish music playing in the background. 🎶 We recognized many of the traditional Irish songs from home. (Think ceileigh music). I bought Daniel this hat. ☘️

Later that evening we ventured out for a beer.

Beautiful views of the western countryside and some Irish music. It reminded me so much of home.

A statue of the Irish poet Oscar Wilde and his cousin.

The King’s Head. A restaurant in honour of the man who beheadded King Charles I.

A boat with a white stripe is a Galway hooker.

The roofs must be replaced once every thirty years otherwise they will catch fire or collapse.

Stone walls are extremely common in the countryside.

We were told this post is often pictured on post cards because of the large amount of signs attached to it.

Driving throufh the National Park, heading to the Cliffs of Moher. The winding road to the cliffs was steep and narrow.

The Cliffs of Moher

The rain held off long enough for us to see the cliffs. The winds were strong and the ground was wet and muddy. It was worth every second.

The path along the cliffs was lined with a rock fence on the outer side and an electric fence on the inner side. You really had to watch your step!

Three people have lost their lives at the Cliffs since the New Year.

In the gift shop at the Cliffs, there was a program to discover the meaning of your name.

McKeeman is infact an Irish name. In Gaelic, Mac Keeman means “Son of Simon”. Fitzsimmon is a translated version of McKeeman.

One last stop after dinner. The sun was beginning to set.

Exposed limestone. On the Western coast of Ireland, where the ground was once hard and rocky, clay was layed over the limestone to make the ground fertile. A few inches below the grass lies limestone. Not a great place to set up your tent, said our guide.

There was plenty of cattle in the countryside. Cows could even be seen high on the mountains.

Today we had a more relaxed day. We toured the Guinness Brewery, the Jameson Distillery, and visited some pubs to hear live music.

We cashed in our drink tickets for a flight of three beers. Equivalent to one pint. 🍺

Rachel and the turtle. 🐢

Jordan and the ostrich. 🐦

The seal and I.

Time is an important factor in the brewing process.

Advertisement of Guinness over the years was a theme of the third and fourth floors.

A view from the Gravity Bar at the Guinness Brewery.

A view from the second floor of the Jameson distillery. Here we had a brief tour of the history and the fabrication of Jameson whiskey.

We sampled three types of whiskey. A scotch whisky, Jameson whiskey, and Jack Daniels whiskey. Jameson was by far the best of the three.

Whiskey and gingerale to finish off the tour.

Ready for a night out. 💃

The Temple Bar. Overcrowded and overpriced.

The atmosphere at Temple Bar.

The drinks were cheaper and the music was better, and it was close to our place.

Today we finished off our Dublin pass by taking advantage of the Hop on Hop off bus service. We visited EPIC museum, Christ’s Cathedral, the Dublin Castle, and Trinity College.

This bridge was designed to look like a harp, a national symbol of Ireland 🇮🇪 (and of Guinness). It was transported to Ireland in one piece by boat.

The Dublin Convention Centre. “It looks a bit like a Hoover.” - Bus Driver

A candle lit in memory of my late grandparents. 💕

The entrance to the Dublin Castle.

The classiest of mirror selfies.

A helicopter pad. The aerial view of the pad has the appearance of a Gaelic symbol.

You won’t find the letter J in the alphabetized books.

The oldest harp in Ireland.

The EPIC museum of Irish Emigration. We started our day here, but an unexpected power outage interrupted our visit.

We returned to the exhibition later in the afternoon.

Technology was an integral part the museum which made for a self-paced and interactive experience.

Today we traveled to Norther Ireland by bus. The total trip was 13 hours. We began with a Black Taxi tour, then went to the Giant’s Causeway and the rope bridge.

These gates separate the Catholic Republicans from the Protestant Loyalists. The gates close daily in the early evening.

The Catholic Republican side.

The Peace Wall. It stands about 40 feet tall.

The cages are meant to protect the homes from maltov cocktails.

The Titanic Museum. There are 1,503 shards, which are all unique, and represent the lives lost on the Titanic.

Our trip to Giant’s Causeway started out with some rain. ☔️

It soon cleared up. ☀️