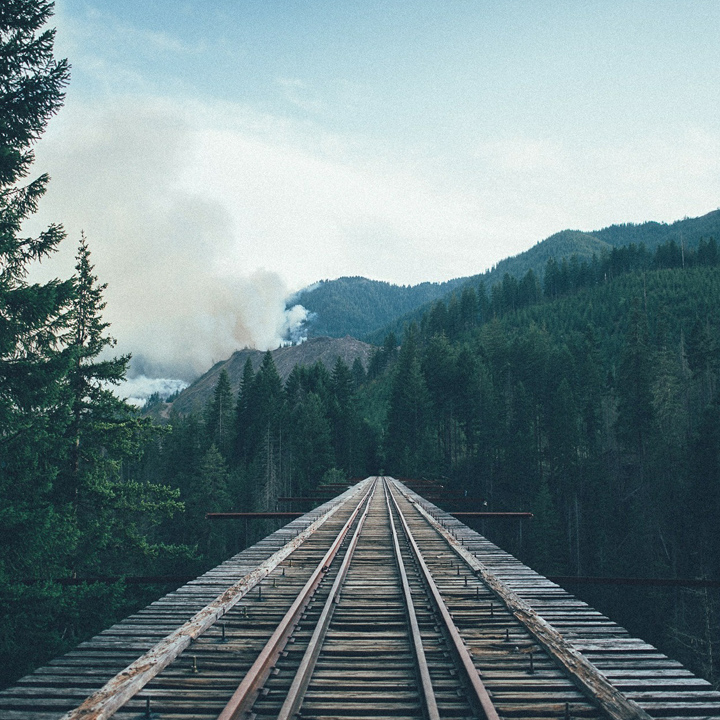 While car rides and bus rides can be scenic, a train trip can go through mountains, through valleys, and go places where roads just don’t exist. Some train journeys, like the Train to the Clouds in Argentina, which sits over 13,000 feet above sea level, reach new heights.

Looking for spectacular views of Argentina or the Swiss mountains? Check out our guide to spectacular train trip journeys across the globe. 🚅

Tren a las Nubes in Argentina

This spectacular train journey takes you along the eastern part of the Salta-Antofagasta railway line that connects the Northwest part of the country with the Chilean border.

Tren a las Nubes is the fifth highest railway in the world, reaching a height of over 13,000 feet above sea level – hence its name, the “Train to the Clouds.”

You’ll experience breathtaking views of the countryside and the Andes mountain range as you cross 29 bridges, 21 tunnels, and 13 viaducts.

The train departs from Salta every Saturday night at 7:05 pm, some people choose to only take the railway one way because it is an 8-hour journey. The train holds about 170 people and includes two passenger carriages, a bar carriage, first aid area, and a dining carriage.

Float on a cloud as you ride through the Andes mountains on Tren a las Nubes. Book your journey here. ☁️

The Orient Express, a long-distance passenger train created in 1883, has a train journey that has changed many times. While the same route does not exist today, parts of it are still in service. The original endpoints of the train service are Paris, France, and Constantinople (Istanbul), Turkey.

Today, the parts that are still serviced take place on the Venice-Simplon Orient Express which travels from Venice to London. This is a private luxury train service for tourists looking for a luxury train ride through several European countries – Italy, Austria, France, and the UK, to name a few.

Through this train’s windows, you’ll see a part of Northern Italy, the gorgeous countryside and mountains of Switzerland, and the countryside of France.

The VSOE journeys to many cities throughout Europe including London, Paris, Milan, Venice, Zurich, Innsbruck, and Verona.

A few times a year, you can take a journey on this train to Prague, Vienna, or Budapest as well. In September, the train travels from London and Paris to Istanbul.

Some seasons have included travel to Cologne, Rome, Florence, Lucerne, the High Tatras, Krakow, Dresden, Copenhagen, Berlin, and Stockholm. It’s important to note that not all destinations are offered year round and the train travels March through November.

In the mood for a train journey to see the best cities that Europe has to offer? Hop on the Venice-Simplon Orient Express. Grab tickets here.

Palace on Wheels & Royal Rajasthan on Wheels in India 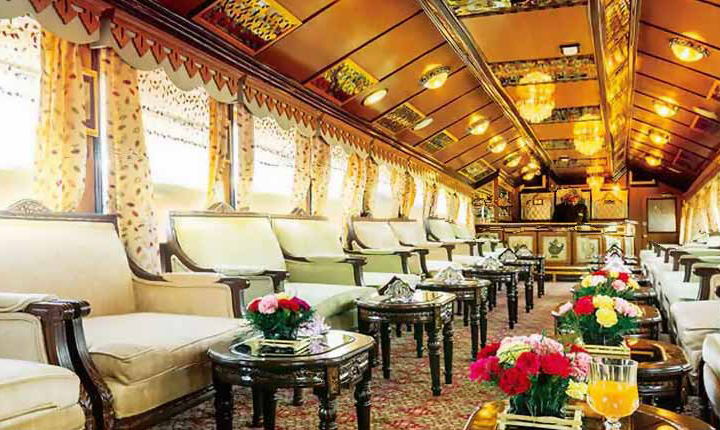 Both of these trains are luxury passenger trains made to take you to some impressive spots in India. The original, Palace on Wheels, inspired the Royal Rajasthan. Palace on Wheels began in 1982 and was originally inspired by the coaches of royalty. Each part of the train is heavily influenced by the culture – through the use of furniture, handicrafts, painting, and furnishings.

In 23 coaches, the train includes 14 saloons, a spa, and two restaurants. Departing from New Delhi, the train visits Jaipur, Sawai Madhopur, Udaipur, Jaisalmer, Jodhpur, and Bharatpurand Agra. Jaipur is Rajasthan’s capital, known as the “Pink City” for its trademark building color. A region with influence from the royal family that once ruled there back in 1727. Purchase tickets here.

The Glacier Express in Switzerland

Have you ever dreamed of taking a scenic train ride through the Swiss Alps? The Glacier Express is known as the slowest express train in the world because it bypasses local trains stops through the two major mountain resorts of Zermatt and St. Moritz in the center of the Swiss Alps but is still quite a lengthy journey.

The journey is 181 miles long through the center of the Swiss Alps, over 291 bridges and through 91 tunnels at altitudes that are sure to give you the most incredible views of the mountains. The trains highest point is the Oberalp Pass, about 6,670 feet high and the lowest point is at Chur, about 1,919 feet.

For a large part of the journey, the Glacier Express travels through the UNESCO World Heritage Site part of the Rhaetian Railway in the Albula / Bernina Landscapes. Search for tickets here. 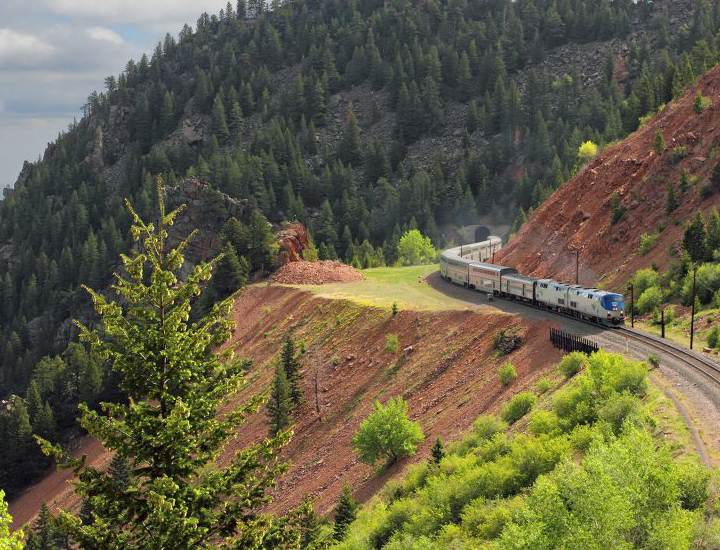 This train journey is said to be one of the most beautiful in North America. The California Zephyr travels daily from Chicago to San Francisco. The route moves through the plains of Nebraska to Denver, across the Rocky Mountains to Salt Lake City, and then through Reno and Sacramento into San Francisco.

Other highlights include the Sierra Nevada Mountains, the Moffat Tunnel, Colorado’s Gore, Byers, and Glenwood Canyons, Winter Park, Truckee River, Donner Lake, San Pablo Bay, and the Carquinez Strait. Not only will you witness gorgeous mountains, but you’ll travel through tunnels, canyons, and deserts.

Book your journey on the California Zephyr here.

The Canadian is a transcontinental passenger train operated by Via Rail Canada that runs between Toronto, Ontario, and Vancouver. Canada is a sight for sore eyes, it will wake you up with incredible views of mountains, forests, and everything in between. You’ll take a trip through dry plateaus into lush, green forests too.

When the train makes its way to Jasper, passengers are encouraged to get off of the train and explore. Part of this is because Jasper is apart of Canadian Rocky Mountain Parks, which is a UNESCO World Heritage site. Jasper National Park is the largest and features glaciers, hot springs, lakes, waterfalls, and mountains.

The train journeys from Vancouver to Jasper, Edmonton, then Winnipeg, Wudbury Junction, and finally Toronto. After departing Kamloops-Jasper, the train runs north along the North Thompson River, one of the most beautiful parts of the train’s route and a little frightening, as the train clings to the mountainside and moves at a very cautious pace.

The Aurora Winter Train travels weekends between Anchorage and Fairbanks, a northbound 12-hour journey. During select months, mid-week departures are made.

On a journey through Alaska, you’ll travel through the backcountry and see the endless, pristine blankets of snow and maybe, if you’re lucky enough, you’ll see a moose in the wild!

You can book a complete vacation through the railway service, including hotel stays and additional activities. The 12 hour trip on a clear winter day will bring you a magnificent view of Denali mountain and shorter days during the winter mean you’ll get to see sunrise and sunset from the train. Book your journey here.

The Ghan Expedition in Australia

The Ghan Expedition is a transcontinental journey through some more remote parts of Australia, where pioneers and ancient Indigenous tribes had once traveled. You’ll go nuts over the green of the Northern Territory tropics, the ochre landscapes of Central Australia, and the gold and open blue skies of South Australia’s valleys and vineyards.

Your time on the Ghan is truly special because most of these areas are inaccessible any other way. You’ll be taking a step back in time and witnessing incredible views where brave early explorers roamed the Outback. Purchase your tickets for The Ghan Expedition here.

The Rocky Mountains or Swiss Alps? Floating about the Andes or traveling through the Outback? Now that you’ve seen our collection of spectacular train trip journeys, which one are you booking next? Leave us a comment below!